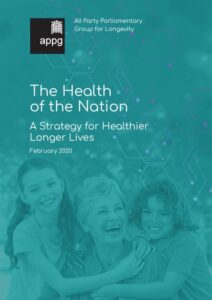 The Health of the Nation – a strategy for healthier longer lives was released by the APPG for Longevity after nine months of evidence gathering, which reveals previous estimates that women on average are living in good health for 64 years are too optimistic.

New NHS data shows that men on average are being diagnosed with their first significant long term condition at 56 and women at 55 – leading to nearly 10 years longer in poor health for women, and seven years for men. As a result, women may live for 29 years in poor health and men for 23 years, an increase of 50% for women and 42% for men.

The evidence also highlights health disparity in our poorest areas as men on average are being diagnosed with a significant long term condition at 49 and woman at 47 years old.

The APPG for Longevity has recommended a number of changes to preventing ill-health, including health as a national ambition and a joint commitment by central and local government, NHS and Public Health England to reduce smoking, obesity, excess alcohol and increase physical activity by 2035 with clear plans. The report also recommends the NHS increases the amount of its budget spent on prevention from <5% to 15% by 2030 and that it maximises strength in research, technology, innovation and data.

Piers Ricketts, chair of the AHSN Network and chief executive of Eastern AHSN, said: “This is an important and valuable report, to which the AHSNs were keen to contribute.

“The AHSN Network is committed to helping people live longer and lead more independent and healthier lives with world-class innovation and technology. This is the focus of several of our national programmes. We have a good track record in working closely with our NHS, industry and research partners to develop and spread solutions to reduce ill-health and health inequalities across England.”

The South West Academic Health Science Network (SW AHSN) is working hard to build extra years of healthy, happy life for people living in South West England by 2035, by placing innovation in health and care where it needs to be. With practitioners and project partners we are facilitating collaboration between innovative people, increasing the pace and scale at which innovation is spread, and ensuring we exchange information about what works, to not only gain more years of life for people in the South West – but to add life to these years. Learn more here and watch our animation.