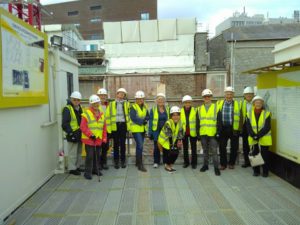 In our continuing series of blogs from social entrepreneurs, Caroline Blackler shares her experiences of setting up a community cinema in Devonport to combat loneliness and social isolation amongst people in later life. ‘Red Velvet Cinema’ received £2,000 from Plymouth bursary arts project ‘Vital Sparks’ to run a pilot showing six classic films, and has since been funded for a further year from the Solutions for an Ageing Society Fund (to which Devon Community Foundation and the SW AHSN are both contributors).

How – and why – did you start social entrepreneurial journey?

Red Velvet Cinema came about, indirectly, from insomnia; the image of an old cinema, with red velvet seats, showing classic black and white films like Casablanca would occasionally occupy my mind during the many hours awake in the middle of the night. Then I met some people who believed I had an idea for a community project and helped me to make it a reality.

What has been your experience since then?

I acquired £2,000 from Vital Sparks to set it up as a pilot project, which got the first films rolling, but this project isn’t about films, it’s about loneliness and social isolation among older people. It’s been hard trying to get people to come because the very ones you are trying to reach are those stuck at home. For a variety of reasons, e.g. loneliness, lack of self-confidence, self-belief or motivation to name a few, they are reluctant to venture out at all, let alone somewhere they don’t know with people they haven’t met.

The greatest cost to the cinema is the screening license which costs £96 for each film (even if you have an audience of just four people!). I managed to keep the cinema going with the Vital Sparks money and a bit extra until I received £5,000 from the Solutions for an Ageing Society Fund at the beginning of October 2017.

What most inspires you about being a social entrepreneur?

I’m just trying to give people who are lonely the opportunity to occupy some of their time in a meaningful way, with the added bonus of companionship and the chance to make new relationships.

Can you share a hard-won lesson you’ve learnt about what makes for a successful (or unsuccessful) social entrepreneur?

A lesson I learnt really quickly is what constitutes ‘success’: the cinema is still really small and I get between eight and fifteen people coming along. I had to stop thinking that such small numbers meant it wasn’t ‘successful’ and shift my perception to acknowledge the significant difference it was making to each one of the individuals who was coming along. One of my regulars, who is 80 years old, told me, ‘I’ve never been married, I’ve never been in a relationship, and this is the only time I talk to people other than when I do my shopping.’

This year, for the first time, he had friends to give Christmas cards.

What change could we make that would do most to support social entrepreneurs in health and care?

At this stage, the greatest support I could have is the support of those people who are connected to and work with lonely, socially-isolated people in their homes, for example, district nurses, podiatrists, occupational health workers etc. If these professionals, who spend one-to-one time with older people, could promote and encourage individuals to come to Red Velvet Cinema, they might be more likely to come. So, connection, communication and engagement.

I don’t work in health and care. I am running the cinema on my own, without pay. My motivation is the desire to see people connected; to reduce an individual’s feeling of loneliness which can be debilitating and, quite frankly, soul-destroying. Everyone deserves better.

You can find out the latest news and showings from the Red Velvet Cinema on their Facebook page.

Image caption: Members of Red Velvet Cinema on a ‘school trip’ to the construction site of the new £37 million pound history centre in Plymouth (Caroline Blackler is fifth from the left).